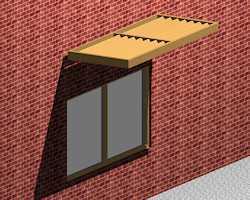 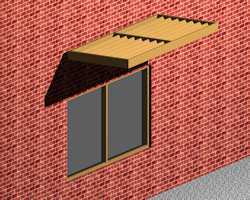 Control the Sun with Sunshades

The primary purpose of a sunshade is to control the amount of direct sunlight through your building's windows. The benefits can be found in so many articles that we will not go into them here. The intent of this page is to show you how it works and give you insight into designing a louvered sunshade system that is right for your building, whether it is to be located in Houston, TX or Minneapolis, MN. The explanation can be as simple or as complicated as we want to make it. We opted for simple, yet effective. We will cover these topics:

Start with the project location and gather these key pieces of information:

*Example: Cincinnati, OH (of course!). Cooling seasons for locations further South will likely be longer and Northern climates shorter. Click the dates above to view the hourly solar altitudes.

Solar altitude is the angle of the sun to the Earth's surface. An angle perpendicular to the Earth's surface is 90° (which only happens near the equator). Locations futher North will have lower solar altitudes than Southern locations. Solar altitude and azimuth for specific locations, by date, are available at www.sundesign.com. You can also find your own favorite websites by doing a search for "Sun Position Tools". To find the latitude and longitude for your project location, go to Google Earth. Keep in mind that West longitude and South latitude must be entered as negative values in most programs.

Solar azimuth is the angle of the sun in relation to due South at any given time. During the day the sun azimuth angle changes from a negative angle (sunrise or East of due South) to a positive angle (sunset or West of due South). These angles change with the seasons based on the solar altitude. Theoretically, the solar azimuth at sunrise at the equator is -90°, 0° at solar noon and 90° at sunset.

How to Shade Southern Exposures

Based on the solar altitude and azimuth and orientation of your building, shading methods will vary. A shelf system is best utilized on Southern exposures and will allow the best configuration for energy savings. Variations in the shelf location, projection, and blade spacings will optimize the energy benefits. The objective is to maximize shading during peak cooling season while allowing direct sunlight and heat gain during the heating season. In most of the southern climates, the need for shading throughout the cooling season generates the greatest energy savings, so we will optimize the shading for this period (April 15 through September 1). This altitude is 60° in our example. 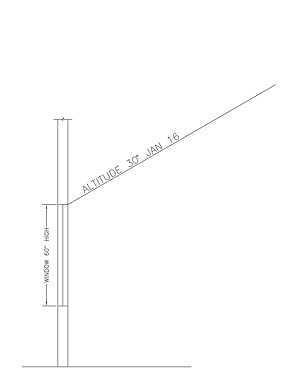 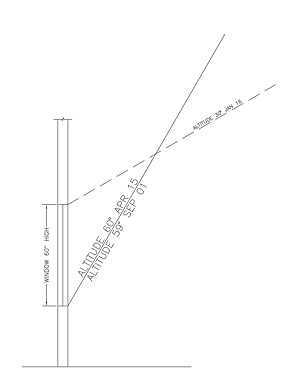 These lines represent the shadow lines at solar noon on the given dates. The intersection of the lines is the optimal point for the outermost tip of the sunshade. This configuration will allow full sun to enter the window during January (the coldest month) and allow little or no sun to enter the window from April 15 through Sept 1 (the warmest months). 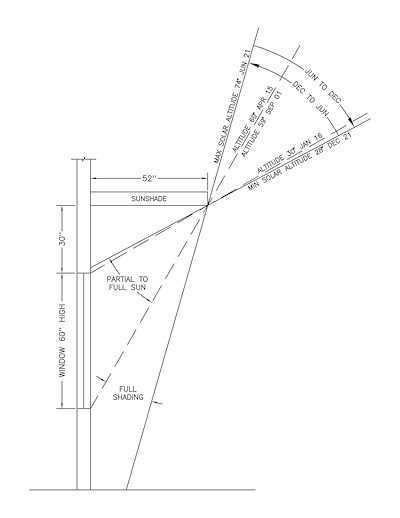 The sunshade location is 30" above the window with a projection of 52". Adjustments can be made to these dimensions as desired to create more or less shading, but the energy benefit will likely suffer.

Also drawn are the maximum and minimum solar noon altitudes for the example location. These give an idea of the shading throughout the year. Notice that the solar altitude stays in the fully shaded region from April 15th through September 1st. The angle change is only 14° during this time of year. Yet the angle changes a remarkable 32° during the remainder of the year. This difference is less dramatic closer, and more dramatic further, from the Tropic of Cancer (the latitude where the sun is directly overhead during June Solstice).

To finish our example, the window width is 116". Width of the sunshade is 4" greater than the window width (120" centered). The sunshade model is H6A36 with a tube trim perimeter frame. This model has airfoil shaped blades at a 35° angle, spaced 6" apart. See below for the resulting shadow maps.

Results: Southern exposure shadow map on January 16 (no shade during 30° altitude peak sun at window). Sunrise to sunset are shown.

Results: Southern exposure shadow map on June 21 (full shade during 74° altitude peak sun at window). On this date, the sun rises North of East and sets North of West. Therefore, the diagrams below are only showing 9:00 am through 4:00 pm because the Southern exposure gets no sun at the remaining times of day.

Keep in mind that the sun changes azimuth and altitude during the day. Additional considerations are: how far the sunshade overhangs the ends of the window; and whether low altitude sun angles can be blocked with baffles or by recessing the windows. The optimal shading will only occur at solar noon for a given day. When the sun is lower in the sky (and to the East at sunrise and West at sunset), the sunshade will be less effective blocking glare and heat gain (though the heat gain will be minimal). Additional sunshades can be applied if necessary for occupant comfort (see below - Southeast and Southwest).

How to Shade Southeastern and Southwestern Exposures

Consider these as South-facing for calculations and sunshade projection from the building, but apply a factor based on the equation:

Example: calculated projection for direct South was 52" (SP = 52) in our original example. Direct Southeast or Southwest will be 45° from South, so A = 45. SEP = 52 * cos(45) = 36.75". The optimal shelf-type sunshade projection for a Southeast or Southwest exposure is 36.75". A sunshade with these dimensions and the 2" overhang is shown below left. Notice that the sun will enter the Southern portion of the window during peak exposure times. Consider extending the sunshade overhang to about 36.75" (shown below right). If you have a number of contiguous or closely spaced windows, consider making the sunshade continuous over the entire span.

Mornings (for Southeast exposures) and late afternoons (for Southwest exposures) will have significant glare. The sun azimuth at these times will be more perpendicular to the windows than a South exposure, admitting more direct sunlight into the building. 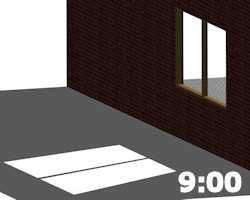 Interior of the building at SE exposure, no auxillary shade

More sunshades can be utilized to minimize direct sunlight and glare at either end of the day. Options are baffles or vertical blade louvers over the windows. Baffles require larger projections than vertical blade louvers, which can be flush or surface mounted. Below is the application of flush mounted louvered sunshades, model H6A48 blades vertical. 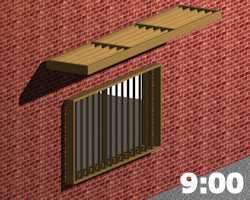 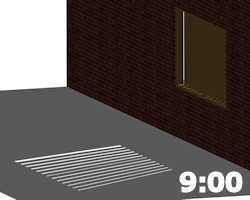 Since the blades are 8" apart, occupants will still enjoy a view of the outdoors, but the glare from morning sun is minimized. During the cooling season, the shelf sunshade will block the sunshine starting at about 10:00. The combination of the vertical blade sunshades and the shelf sunshades work in tandem throughout the day. In the heating season, the vertical blade and the shelf sunshade will allow sun to enter from about 10:00 on, capturing most of the heat gain benefits. Option: if your wall is thick enough for the window and the louvered sunshade combined, the sunshade can be recessed into the wall instead of flush mounted.

How to Shade Eastern and Western Exposures

The principles are the same for Eastern and Western exposures, so we will address the Eastern Exposure only. Use the same concepts to shade the Western exposure, but account for late-day sun instead of early morning sun.

The sun angles early in the morning start at 0° (sunrise). Obviously we will be unable to block all sunshine from entering the building without blocking the view for occupants. The best compromise is to block the sun from about 10:00 am - noon in the cooling season, while admitting this sun during the heating season. Use interior blinds or shades to block glare for occupants. This will allow the heat gain to enter the interior space during the heating season, gaining the energy benefits.

We are going to evaluate one shading method, though others can be used. The steps for finding the right sunshade position and projection are similar to those of the Southern exposures, but with a few variations: 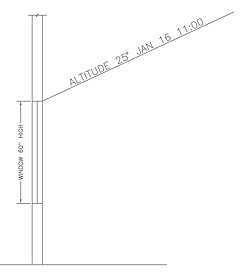 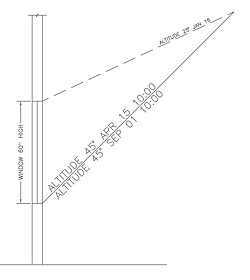 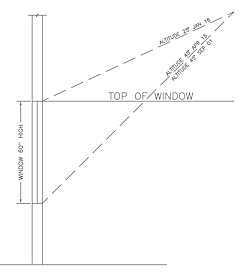 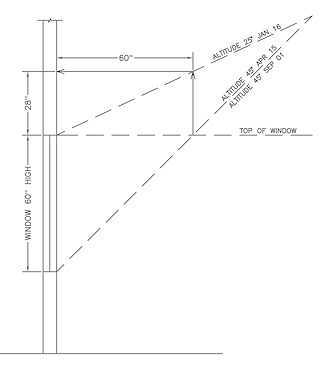 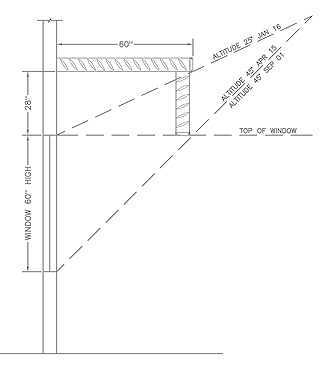 Draw the shelf sunshade (any model can be used). Draw an extension at the front dropping vertially based on the line from Step 4. The extension will effectively block the sun while providing an uninhibited view for occupants of the building. The objective of the extension is to allow the low angle sun (25°) to pass, while prohibiting the high angle sun (45°). For our example we have chosen sunshade model H6A24. This model has blades angled at 25° and spaced at 4". To evaluate the capabilities of any sunshade model, draw 2 blades in section, including the appropriate solar altitude angles. 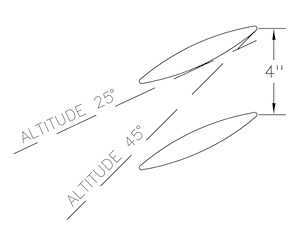 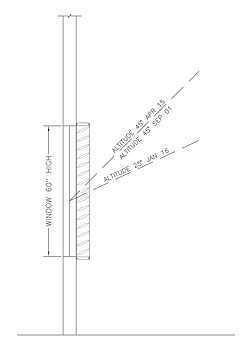 It is evident that we will allow about 75% of the 25° sun to pass, while blocking about 85% of the 45° sun. These calculations can be more carefully evaluated if you wish, but for our example the diagram and an estimate are sufficient. Also included above is an alternate sunshade configuration (vertical mount) that will provide the proper shading, but will partially obstruct the view for occupants.

Results: Eastern exposure shadow map on January 16 (minimal shade during 25° altitude 10:00 sun at window). Sunrise to noon are shown. The sun will not shine on the Eastern exposure during the remainder of the day.

Results: Eastern exposure shadow map on April 15 (full shade during 45° altitude 10:00 sun at window). Sunrise to noon are shown. The sun will not shine on the Eastern exposure during the remainder of the day.

In conclusion, shading methods can vary for the various building exposures. The methods shown are for demonstration, and can be utilized on most building projects. Keep in mind they are merely one method, with numerous other methods available. Feel free to take liberties and utilize your own sun shading techniques. 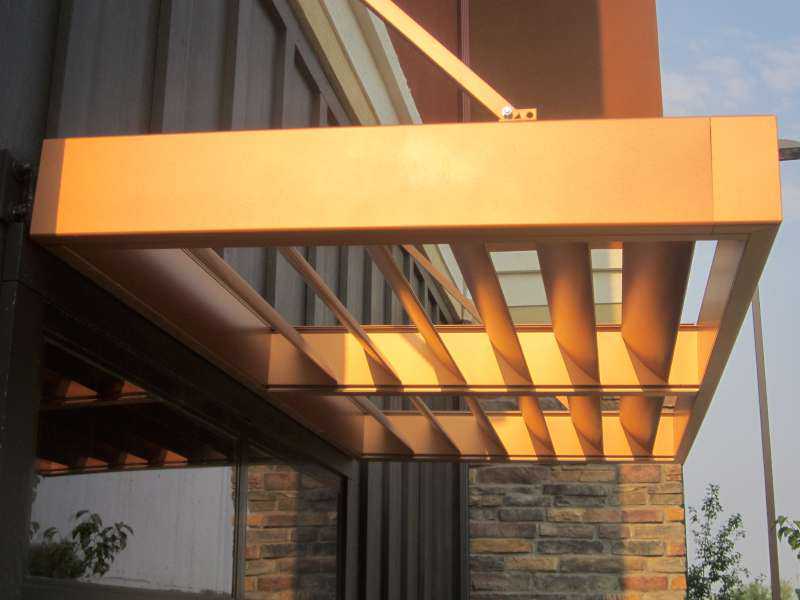